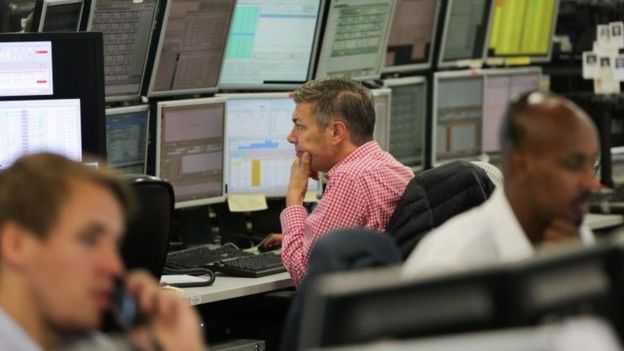 Pressure has eased on UK financial markets after two days of turmoil in the wake of the Brexit vote, with the FTSE 100 share index opening higher.

The pound had risen as high as $1.50 shortly before the result of the vote became clear on Friday morning.

But on Monday, the currency plunged to a 31-year low against the dollar, while some share trading was temporarily halted.

Also on Monday, yields on 10-year government bonds sank below 1% for the first time as investors bet on an interest rate cut.

The UK market recovery was led by the sectors that had been worst hit in the past two days’ trading – banks, property and airlines.

Barclays and Lloyds were up 3.8% and 5.5% respectively, while housebuilders Persimmon and Taylor Wimpey were 3.4% and 5% higher.

Airline Easyjet, which saw big losses on Monday, was up 4.3%.

Shares in gold miners, which had performed well on Monday, were among the biggest fallers on the FTSE 100 as the gold price weakened.

Randgold Resources and Fresnillo were down 2.1% and 4.2% respectively.

Other European stock markets also made gains, with the Dax in Frankfurt up 2.8%, the Cac in Paris up 3.2% and Milan rising 4.3%.

All three stock exchanges have fallen more heavily than London in the past two days of trading since the vote by the UK to leave the EU.

“The sun is out in London, the FTSE 100 is rallying and even the pound is moving higher,” said Chris Beauchamp, senior market analyst at IG.

“You might almost think there had been no Brexit vote and no downgrade of the UK economy overnight. The FTSE’s unwillingness to stay below 6,000 is remarkable, and while the damage to individual shares is still immense, some of that has been repaired today.

“A bounce was overdue, of course, and it doesn’t change the short-term narrative of uncertainty and fear, nor the longer-term bear market in equities that has been ticking along for over a year now.

“Nonetheless, the sight of so many major companies trading at remarkably low multiples, such as Next and Prudential on 10 times earnings, and the juicy dividend yields on offer, has clearly been too much for some investors to resist.”

In another development, the Bank of England injected funds worth £3.1bn into UK banks, following a special auction for six-month finance.

It was the first such operation since the referendum vote.

Banks bid for £6.3bn worth of liquidity, but the Bank allocated less than half that amount.

Bank governor Mark Carney said on Friday that the Bank stood ready to provide more than £250bn of additional funds through its normal facilities “as a backstop, and to support the functioning of markets”.

“We are in a prolonged period of economic adjustment in the UK, we are adjusting to life outside the EU and it will not be as economically rosy as life inside the EU,” he told the BBC’s Today programme.

However, he added: “I think we can provide a clear plan.”

Mr Osborne said that the recent dramatic market moves were natural: “The markets will move up and down as you’ve seen in the past 24 hours – we are in a period of prolonged adjustment.”

He said there were back-up plans in place: “We have contingency plans. The banks are safe and secure, the Treasury is working with the banks to provide stability for the markets and we spent a long time working on these plans.”

When asked if there would be tax rises and spending cuts, he said: “Yes, absolutely.”

Early on Monday, the chancellor had attempted to reassure investors and calm the markets, saying the UK was ready to face the future “from a position of strength”.