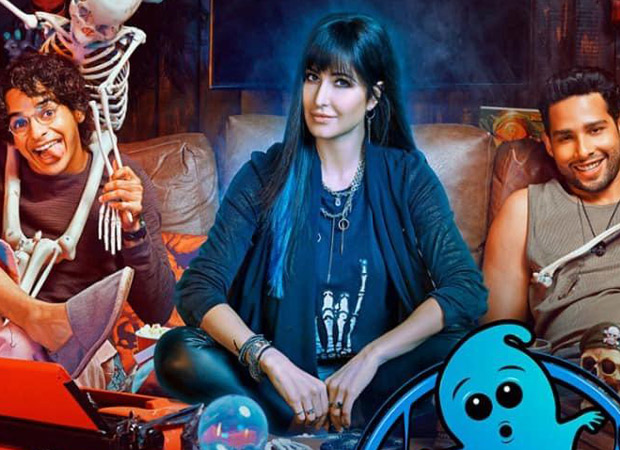 PHONE BHOOT is the story of two ghostbusters. Sherdil Shergill aka Major (Siddhant Chaturvedi) and Galileo Parthasarthy aka Guru (Ishaan Khatter; credited in the film simply as Ishaan) are best friends who have a crazy interest in ghosts and spirits ever since they were kids. They want to make money out of their love for ghosts. Sadly, all their business ideas flop. Nevertheless, they continue trying and they host a ‘Moksha Party’. It emerges a success as several partygoers mark their presence. Unbeknownst to Major and Guru, they are all ghosts. One such ghost is Ragini (Katrina Kaif). She informs them that they are gifted with the ability to see dead people. Hence, she gives them a business idea that they should start a phone line for those who want to get rid of ghosts. Major and Guru refuse at first. But their fathers arrive at their doorstep and ask them to pay Rs. 5 crores, which is the amount spent on their sons till date. They are given a time period of three months. With no other option, Major and Guru accept the idea although they also wonder why Ragini wants to help them. At first, their initiative gets massively trolled. Later, once they start solving cases, their business idea becomes a success. It also gets them in the bad books of the evil Atmaram (Jackie Shroff), who traps spirits trying to achieve ‘moksha’ (salvation). 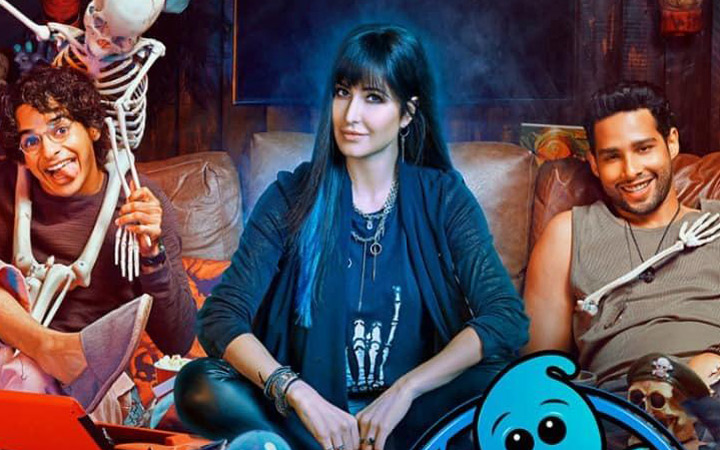 Gurmmeet Singh as a director handles certain scenes with panache, be it Major and Guru finding success as the ghostbusters, Major and Guru’s encounter with Chikni Chudail (Sheeba Chadha) or Major and Guru’s antics when Ragini is narrating her story. The pop culture references of FUKREY [2013], Katrina Kaif’s Mango Slice ad, Rajinikanth, MIRZAPUR [also directed by Gurmmeet Singh and backed by Excel], the coffin dancers, HINDUSTANI [1996], KHILADIYON KA KHILADI [1996], KOI MIL GAYA [2003], KABHI KHUSHI KABHIE GHAM [2001] etc. add to the fun element. On the flipside, certain references will go over the top. The character of Raaka forms an important part of the film but the makers, for no reason, did not feel it was important to explain its relevance to the current generation, who might have never watched a Ramsay film. But the bigger problem of the film is that it fails to evoke laughs in the second half. The climax is unimaginative and anything but funny. Moreover, the track of the killers of Ragini’s fiancée is simply not addressed after a point.

Speaking of performances, Katrina Kaif is in fine form and manages to give an entertaining performance. Siddhant Chaturvedi puts up a confident act. Ishaan is also fine and what’s praiseworthy is that though both are over the top, they don’t ham. Jackie Shroff is okay as the caricature villain. Sheeba Chadha is quite funny. Nidhi Bisht (Lavanya) and Armaan Ralhan (Dushyant Singh) are fine. Manuj Sharma (Rahu) and Shrikant Verma (Ketu) fail to leave a mark. The FUKREY boys – Pulkit Samrat, Varun Sharma and Manjot Singh – are there for a scene.

On the music front, ‘Kinna Sona’ is the best of the lot and is well choreographed. ‘Phone Bhoot Theme’ is relegated to the background and works. ‘Jaau Jaan Se’ is forgettable while ‘Kaali Teri Gutt’ is forced into the film. John Stewart Eduri’s background score is fine.

K U Mohanan’s cinematography is neat. Vintee Bansal’s production design is quite imaginative. Poornamrita Singh’s costumes are appealing. Shipra Singh Acharya’s make-up and prosthetics is convincing. Manohar Verma’s action is not at all gory. VFX is more or less satisfactory. Manan Ashwin Mehta’s editing is fair.

On the whole, PHONE BHOOT has a fine first half with all the ingredients of a youthful, fun horror comedy. However, the second half could have been better. At the box office, the film will appeal to an audience who love horror comedies. 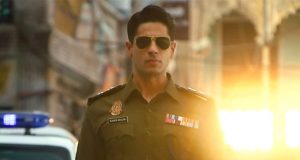 Sidharth Malhotra resumes shoot for the next schedule of Rohit Shetty’s...