GOVINDA NAAM MERA is the story of a man in deep trouble. Govinda Waghmare (Vicky Kaushal), a Bollywood background dancer and aspiring choreographer, is unhappily married to Gauri (Bhumi Pednekar). They live in a mansion in the heart of Mumbai but it’s in a legal dispute. Govinda’s father Gopi Vishwakarma (Wilson Tiger) was married to Charulata (Veenah Naair) and had a son, Vishnu (Akshay Gunawat) down South. But in the late 80s, he came to Mumbai, had an affair with Govinda’s mother Asha Waghmare (Renuka Shahane) and she gave birth to a son (Govinda). He then died, leaving behind the mansion Asha Niwas with Asha becoming the owner. Since then, Charulata and Vishnu are fighting in Court to claim ownership of the mansion. While Govinda is fighting this case on one hand, on the other hand, his marriage is on the rocks. Gauri dominates him and he’s unable to retort. He asks for divorce but Gauri demands Rs. 2 crores that her family had paid Govinda as dowry. Govinda is having an extra-marital affair with Suku (Kiara Advani), who’s also a fellow dancer. Though she loves him dearly, she’s fed up with Govinda’s problems and wants him to leave his wife as soon as possible. Govinda, meanwhile, is fed up with Gauri’s behaviour and he buys a gun for Rs. 2 lakhs from Inspector Javed (Dayanand Shetty). However, he doesn’t have the guts to shoot her. He hasn’t paid Javed the amount to buy the gun and the cop is constantly harassing him over it. At this point, Govinda and Suku get a golden chance of earning Rs. 8 lakhs. They are asked to choreograph a music video for Sandeep Dharkar aka Sandy (Jeeva), the son of dreaded politician Ajit Dharkar (Sayaji Shinde). They agree but the shoot doesn’t go as intended. Ajit is furious and instead of paying them, he asks them to refund him the amount spent on shooting the song, which is a whopping Rs. 30 lakhs! In short, Govinda is in trouble from all sides. At this point, fortune smiles upon him but it also brings with it a share of problems. What happens next forms the rest of the film. 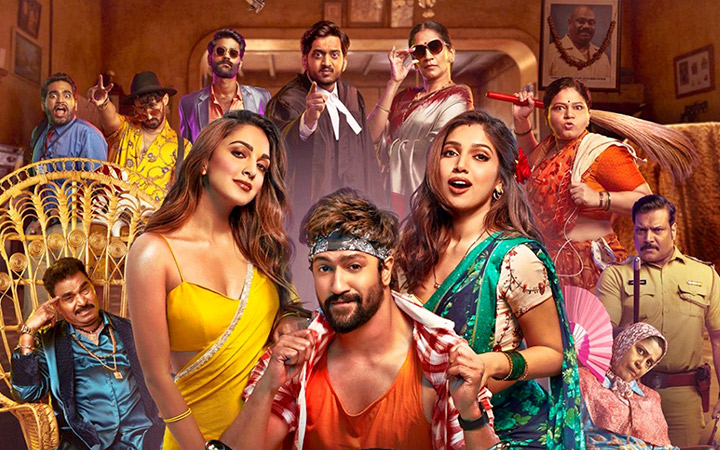 Shashank Khaitan’s direction is neat. Handling such diverse and distinct characters and giving them justice is no easy task. In this regard, Shashank succeeds big time. The second half is longer and yet one doesn’t feel it’s getting lengthy or dragging as there’s so much happening. The intermission point is unexpected and the developments in the last 30 minutes are quite arresting. The treatment and Mumbai-ness do give one a déjà vu of BLUFFMASTER [2005] and LOOTCASE [2020] but that is not a deterrent.

On the flipside, some plot points are plain silly, and also convenient. A major plot point, related to Gauri, is quite far-fetched and might not be easy to digest for a section of the audience. The scene where Govinda is chased by Sandy in the second half serves no purpose and is simply forced to just add more tension. Moreover, Gauri’s backstory and family background is never established and it does hamper the impact, especially with what happens in the second half.

Speaking of performances, Vicky Kaushal handles the role of the distressed husband with ease. This is also his most commercial role and he nails it. Kiara Advani looks stunning and performs ably. Her outburst in the second half is memorable. Bhumi Pednekar is loud as per the requirement and it works big time. If only she had got funnier lines to mouth, it would have aided her performance further. Renuka Shahane is over the top but her character is quite amusing and that helps. Amey Wagh (Kaustubh Godbole) is highly dependable. Viraj Ghelani (Baldev Chaddha) puts up a confident act. Trupti Khakmkar (Manju; maid) is hilarious. Dayanand Shetty reminds one of his act in the TV show ‘CID’ but due to quirks in his character, it stands out. Akshay Gunawat, Jeeva, Sayaji Shinde and Kenneth Desai (Judge) contribute to the madness. Veenah Naair and Wilson Tiger get limited scope. Ranbir Kapoor and Shashank Khaitan (Anand Joshi; builder) are fair in special appearances.

Music is limited but well-woven. ‘Bijli’ is energetic and well-choreographed by Ganesh Acharya. ‘Pappi Jhappi’ has an important part of the film while ‘Kya Baat Ay 2.0’ is played in the end credits. John Stewart Eduri’s background score enhances the crazy vibe of the film.

On the whole, GOVINDA NAAM MERA rests on a far-fetched and illogical second half. But thanks to the performances, fast-paced narrative and some unexpected comic and thrilling moments, it turns out to be a watchable film. Disha Patani bikini photo is the hottest thing you will see...